I have in front of me a remarkable and unique work of art created in 1994 and given to my sister and I as a Christmas present at the end of that year.

Nowadays, this would be called an “Art Book” but this was created before the days when such projects were fashionable. 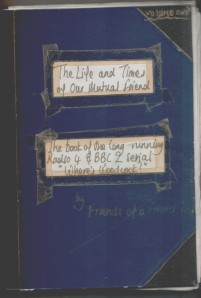 I’m referring to “The Life and Times of Our Mutual Friend (Volume One)” by Friends of a Friend INK. Back in the day when this project was conceived, my sister and I spent holidays with our friends Hoagy and Jessie constructing advanced versions of the game of “Consequences”.

When read out, the resulting story goes something like this:

Winston Churchill
met
Napoleon Bonaparte
on
Dartmoor
Churchill said:
“Lovely weather for the time of year”
Napoleon said:
“I’m tired of washing socks”
And the consequence was:
They sailed away in a viking longboat

This lends itself to a surrealism that we took to its ultimate heights.

We drew pictures with various heads, bodies and legs, composed rambling stories, invented books (complete with excerpts and reviews), wrote letters and made up recipes using the consequences approach. The art form reached its peak in this monumental volume, composed, as the fly-leaf describes, between November the 6th and December the 30th 1994.

Well, to share the contents would only baffle the reader because every third line is a clever in-joke that makes reference to some of the other games we played, the code names we invented for some of “our mutual friends”, and the characters we assumed on long walks along the Cornish coast. However, the meticulously realised watercolour illustrations are instantly accessible.

Here is my sister: 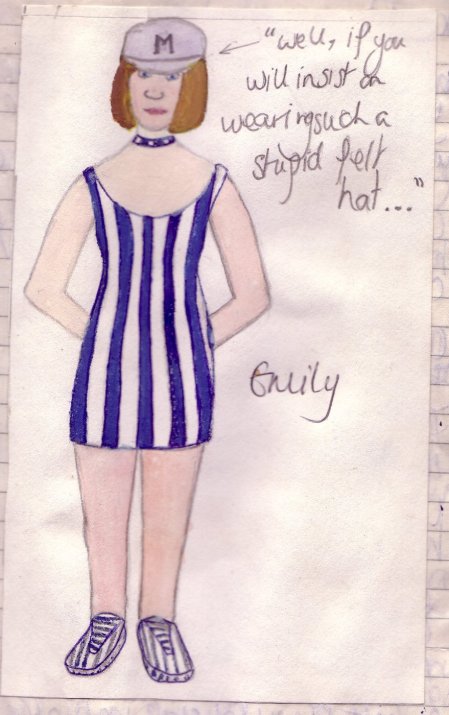 And here is me: 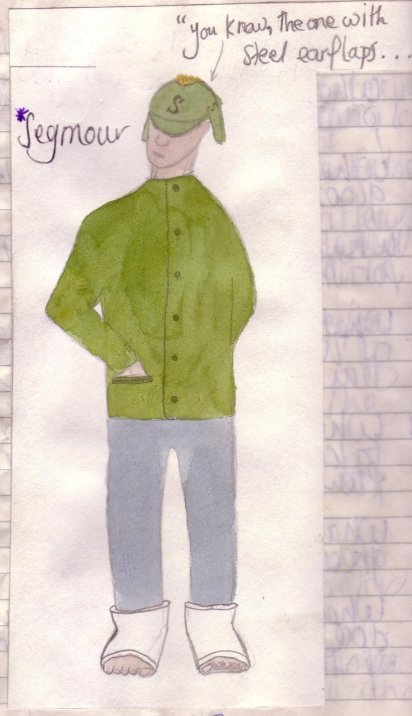 Turning over these pages, I am reminded of the endless inventiveness and creativity of children (well, early teenagers) growing up WITHOUT TELEVISION.

All four of us have grown up to be writers of one sort or another. You can read Jessie’s literary blog “The Filthy Comma” and look forward to the novel that I believe is in progress. My sister blogs at “Through The Lattice” and is working on a series of books for children while home-schooling her own brood. Hoagy was a fairly prolific generator of online content and gave me some solid pointers when I started out freelancing. I’m podcasting my short stories at “Stories from the Borders of Sleep.”

In the meantime, here are some sample exam questions from The Life and Times of our Mutual Friend:

– What colour did the passing people turn at the very thought of it?
– What is the music in the hall of the mountain king and who does he point at with his left ear?
– What should you do when a smooth rich texture has been achieved?
– What was Don Quixoat doing in the moat?
– What does Princess Taiwan break over her knee?
– What is the need of the person Jim gives his pension book to greater than?

This site uses Akismet to reduce spam. Learn how your comment data is processed.